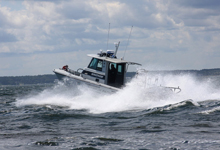 The Wareham Harbormaster/Shellfish Department is responsible for over 54 miles of coastline, and over 1200 acres of freshwater ponds. During the summer season the Town of Wareham will have as many as 3000 vessels using the waterways at any given time.

The primary duties performed by the Harbormaster Department are, promoting boating safety, enforcement of Federal, State, and local laws and regulations, providing 24hr emergency response to maritime emergencies and various other situations, management of fifty-seven mooring field locations by the harbor service permit system, maintain town navigational aids, and the operation of the "Pump-Out" waste management program which promotes better water quality amongst the Town of Wareham's largest natural resource.

Along with the duties performed as Harbormaster, the department takes on the role of Shellfish Constable. This consists of the protection, propagation, and enforcement of a variety of species which use the waterways as there habitat. The Shellfish Department over the years has increased its shellfish propagation to include the purchase of a shellfish upweller which is capable of raising over 1,000,000 pieces of shellfish to help replenish Wareham's shellfish industry and pastime.

The Department also oversees the operation and law enforcement of the herring and smelt fishery. All runs, ladders, streams, and passageways are continuously maintained to allow an effective passage for a productive spawning cycle.

The Wareham Harbormaster/Shellfish office is responsible for the day to day operation of maintaining information pertaining to all vessels situated in Wareham, the issuance of a variety of required permits and collection of all fees for harbor service permits, recreational and commercial shellfish permits, transfer station permits, beach parking permits, herring and smelt permits, and maintaining commercial shellfish catch reports.

When approaching Onset from either the Cape Cod Canal or from Buzzards Bay, turn to the west into the 100-ft. Onset Bay Channel, keeping about 75 feet to the southwest of flashing white light 11 on a steel-pile dolphin. Use the latest chart for the eastern end of Buzzards Bay - the entrance buoys to the Cape Cod Canal were renumbered a couple of years ago.

In the channel, you find a minimum depth of 12 to 15 feet from the entrance to Wickets Island, then 14 feet right up to the town wharf. Around the boat basin, youâ€™ll find from eight to 15 feet of depth. There are two anchorages, one at the town wharf and another at Point Independence - both are well-sheltered and have excellent holding. The inlet at Hogs Neck as you enter the channel may seem inviting, but the bottom is covered with eel grass, the holding is poor, and the area is exposed to heavy winds and turbulence from the mouth of the canal.

Stay well within the channel - just outside the channel, the bottom shoals up (as low as one foot around Onset Island, and there are rocks). After turning at Wickets Island, you can anchor safely or pick up a mooring. At the anchorage off the docks at Point Independence, the Point Independence Yacht Club maintains a few guest moorings. Inside Wickets Island, reached from the channel to the west, the town maintains some moorings and depths on both sides allow for safe anchorage there, also. At the yacht club, launch service is available. From both sides of Wickets, you can walk to restaurants, grocery stores and laundry facilities ashore.

You can also approach to or from Wareham Narrows. Use the charts listed above for guidance.