Owen Park, off Main Street (just beyond the shopping district), honors one of Vineyard Haven's whaling captains. The town beach here is a fine place to watch the harbor. Ferries shuttle in and out, providing the Island's year-round connection to the mainland. 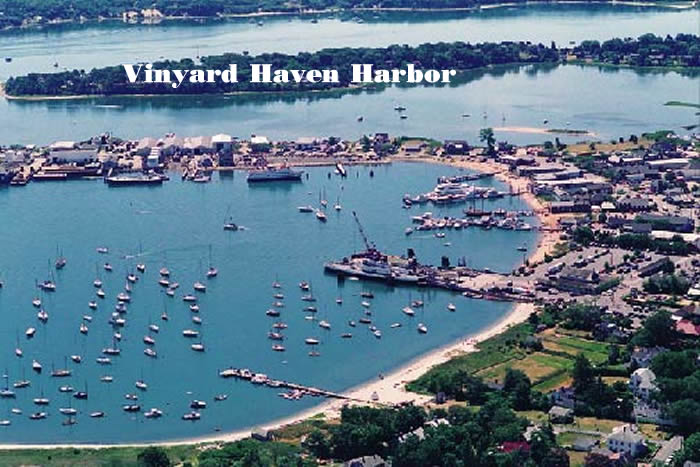 On the opposite side of Main Street is the Old Schoolhouse Museum. Erected in 1829, this building has served many uses. It was once the original Tisbury School and later the Congregational Church. It is now the headquarters for Sail Martha's Vineyard. In front of the building stands the Liberty Pole, commemorating the daring of three teenage girls who inserted gunpowder in the base of the town's liberty pole in 1776 and blew it up to keep it from being used as a spar by a British warship.

When the Congregationalists outgrew their little church in 1844, they built a neoclassic building on Spring Street that later became the Unitarian Church and eventually the town hall. Best known today as "Association Hall," Vineyard Haven's municipal building is one of the Island's handsomest architectural legacies of whaling days.

When ships were powered by wind and canvas, Vineyard Haven was one of New England's busiest ports. Most of the coastwise shipping traveled through Vineyard Sound (13,814 vessels were counted in 1845). Holmes Hole, as this harbor community was called, provided a convenient anchorage. Here a ship and its crew could lay over comfortably to wait out bad weather, pick up provisions, or take on a pilot who could negotiate the rips and shoals that were the special perils of this sea route.

There are many scenic places outside the town proper. The head of Tashmoo Lake seen from State Road, the West Chop Lighthouse, and the area around the drawbridge on Beach Road are favorite spots for photographers.

There is good news on the Vineyard Haven waterfront. Douglas Rock, an extremely dangerous hazard to navigation, has - finally - been marked. The rock, as big as a Volkswagen Bug and close to the surface in waters off West Chop, is now identifiable by a tall spile and sign that says: "Rocks." The marking brings closure to a struggle that has gone on for years. Vineyard Haven harbor master Jay Wilbur said he hopes boaters will pay attention to this spile and give it wide berth. "There are a lot of rocks out there," he said. "You take a big risk going over there."

Credit for getting the navigational hazard marked goes to a 95-year-old Vineyard Haven resident, Francis "Pat" West Jr., the commodore of the Holmes Hole Sailing Association. "I've known about that rock since I was a boy," said Mr. West. What is perhaps most amazing about the rock is that there have not been more boating accidents at the site. The rock is huge, formidable, unforgiving and never appears above the surface. It is a Vineyard Haven landmark that has caused mariners great misfortune. Mr. Wilbur can recall incidents when boaters hit the rock and had to do serious repairs to their boat. Others are luckier; they only tap it. "There are a number of rocks in the area," Mr. Wilbur said. A second rock, half the size of Douglas rock, is 75 feet to the north.

It was a struggle getting Douglas rock named and identified on the nautical charts. Mr. West headed up the effort two and a half years ago. With help from the community he got the U.S. Board on Geographic Names to agree in October 1999. Mr. West, along with help from Hugh W. Schwarz, another town resident, sought the support of the town's selectmen and harbor management committee. They originally hoped to name the rock after Robert S. Douglas, captain of the topsail schooner Shenandoah and owner of The Black Dog Tavern. Mr. Schwarz said: "The policy on commemorative names precludes geographic features being named for living persons, hence the connection to James Henderson Douglas." James Henderson Douglas is Robert Douglas's father and a former secretary of the Air Force and deputy secretary of defense. He lived from 1899 to 1988. The family lived in the shore side house for more than 25 years before selling it. Mr. Schwarz said once the name was granted, the group then had to contact the U.S. Coast Guard to determine how it would be marked. "Their reply, not unexpected, was that budget restrictions prevented their help. The idea of a private aid to navigation was welcomed. The town sought and received a permit from the Coast Guard on June 5, 2000," Mr. Schwarz said. Mr. Schwarz is the chairman of the Holmes Hole Sailing Association's handicap committee. It is his job each year to handicap the sailboats of varying sizes so that they can all compete together in races. Mr. Schwarz said Ralph Packer of Vineyard Haven donated the spile. Steve Ewing, a dock builder from Edgartown, donated his time and equipment. The spile was put in on April 19, one of the first calm days this spring. The event came close to being a ceremony. Mr. West and others went out to watch the effort. "My first memory of encountering the rock was in the summer of 1929, said Mr. West. "I was skippering the gaff-rigged sloop Venture. I was told about the rock and then I began to look for it. I did find it. It is about 15 feet in diameter and has a flat surface on the top." Mr. West went on to purchase the 38-foot sloop three years later. "When the tide is low, the top of that rock gets really close to the surface," he said. It gets within about 20 inches. "Last September I hit the rock again. I was trying to find it," Mr. West said. He was skippering his own boat, Erda, a 22-foot Friendship sloop. "It is kind of a shock to hit the damn thing. You don't expect any rock around there. It is very deceiving."

Mr. Wilbur has high praise for Mr. West's stamina in trying to go through the bureaucracy to get the rock named and identified. "Everyone has talked about that rock. At the boatyard and on the waterfront, people will say, â€˜yeah we ought to do something about that rock.' Pat did something about it." Mr. Wilbur said that among many the rock was informally called "shipyard rock" for good reason. Hitting the rock could be costly. It is already pretty clear on the charts that the waters off West Chop are troublesome. "You shouldn't be going in there," he said. "The Hales love that rock," Mr. Wilbur said, then smiled. It brought them business.

In Lagoon Pond there is a rock that has been marked for years - Robinson Rock. Robinson Rock is like an iceberg. A tiny portion appears above the surface, while the much larger part of it lies below. Mr. Wilbur has marked the rock with a floating buoy. "The Lagoon Pond Association has asked that Robinson's Rock be marked by a spile but I have turned it down. I don't think a spile would survive the ice of winter," Mr. Wilbur said. Mr. Schwarz offered high praise to Mr. West. "Here you have a guy who is 95 years old. While the rest of us only talk about doing something about the rock, he is the one who did something about it. If it wasn't for Pat, the rock wouldn't have been named."

The new spile is readily visible from the Sheriff's Meadow Foundation open field at West Chop. Mr. Schwarz said: "I hit the rock in 1934. I was in the Vineyard Sound Interclub, we were sailing Vineyard eighteens. We were competing and I was coming back from a mark in the Sound. I had Arthur Besse Sr. with me. We hit the rock with the spinnaker up." The force of the impact caused no damage, but Mr. Schwarz said: "Arthur went right into the cabin." "I was 16 years old," Mr. Schwarz said.