Approaching from the south, round red bell No. 2 off West Island and head for the flashing green (4 sec) bell No. 9A at Nye's Ledge (course: 047 degrees magnetic). Leave Cormorant Rock, marked by a green and white daymarker, at least 30 yards to port to play it safe (Cormorant Rock is pyramid-shaped - you may strike a rock if you pass to close to it). After you pass Cormorant Rock, you can change course for green can No. 1 off Mattapoisett Ledge, leaving it to port as you turn into the channel (course: 330 degrees magnetic), then sail or motor well away from the channel markers - they also mark underwater obstructions.

You may see local sailors passing inside cans No. 1, No. 3, or No. 5 but since there are rocks, ledges and sandbars that leave only a foot or two or three of depth, its a good idea to stay outside No. 1, turn to port and follow the well marked channel into the harbor. 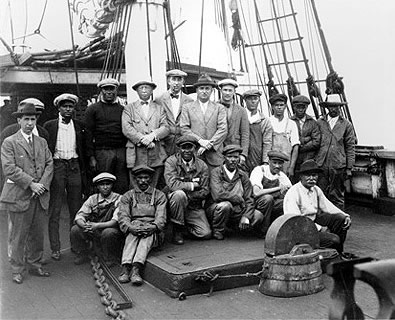 Pictured: Captain Antone T. Edwards and crew of the bark Wanderer, the last square-rigger to go whaling under American registry, on the eve of sailing in August 1924. Outward bound the next day, the Wanderer went aground in a storm near Cuttyhunk, a total wreck.